The idea for The Strike & Ellacott Files was conceived in the fall of 2020, just after the release of Troubled Blood. It all started with Lindsay and Kenz, who had met during a Twitter re-read of the Strike books hosted by Bill of StrikeFans.com. After realizing they were equally obsessed with Strike and Robin’s relationship, the two became friends. They devoured Troubled Blood as soon as it came out; two weeks later, when they realized they were nowhere close to running out of things to say about the book, they decided to start a podcast.

The first episode of The Strike & Ellacott Files aired in January of 2021 as Lindsay and Kenz embarked upon a year-long re-read of Troubled Blood. They were joined early in the series by recurring special guest Pools, who first appeared in episode 8 and eventually joined the podcast as a permanent third co-host.

Since then, The Strike & Ellacott Files have completed our re-read of Troubled Blood, and gone back to the beginning to make our way through The Cuckoo’s Calling. New episodes of the podcast are released bi-weekly, with frequent appearances by special guests and numerous bonus episodes in addition to our regular close readings. We hope you join us in our conversation as we journey through this wonderful series; you can expect a little bit of literary analysis, a lot of laughs, and a hefty dose of appreciation for our favourite private detectives. 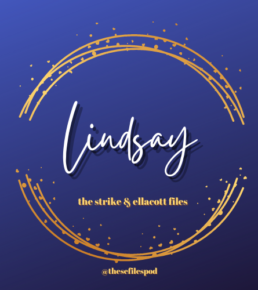 Lindsay is a regular host of TSEF from Southern California. Being a massive Harry Potter fan, she bought The Cuckoo’s Calling as soon as it was revealed it was written by JK Rowling. She’s always been interested in crime fiction and true crime so her favorite genre being written by her favorite author is a perfect combination for a deep and real love for the Strike series.

She worked for a Private Investigator from 2012-2015, which she guarantees is not as exciting as reading about it and sadly, her boss was not Cormoran Strike! Lindsay started working with Strikefans.com during the early months of 2020 and began connecting with others in the fandom. She is married with a seven year old son and a baby girl. You can follow Lindsay on Twitter at https://twitter.com/LindsayMLand 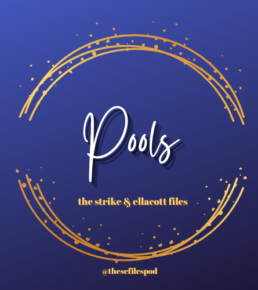 Pools joined The Strike and Ellacott files as a special guest for Episode 8, and enjoyed it so much that she ended up sticking around to become a permanent host on the podcast. She first read Strike when J.K. Rowling was revealed as the author of The Cuckoo’s Calling, and has been involved in the Strike fandom since its earliest days.

She particularly enjoys writing Strike fanfiction, and spends her free time (when she’s not talking about Strike) playing video games and reading. Pools lives in Canada, and is currently completing her PhD in English. You can find her fics on https://archiveofourown.org/users/pools_of_venetianblue/works 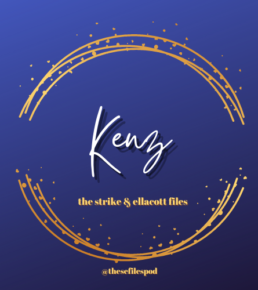 Kenz is one of the original regular hosts of TSEF. She maintains TSEF’s social media presence and is the voice behind the intro and outro of the podcast.

After first encountering the Strike series in 2013, she became obsessed shortly thereafter, and in late September 2020, came up with the idea for the podcast during downtime at work; the rest is history. She lives in Northern California and, when not thinking about when Strike and Robin will finally declare their undying love for each other, enjoys playing video games and having fun with her four dogs, all of whom are named after other animals. You can follow her on Twitter at www.twitter.com/kenzthepea