Like many of my fellow Strike fans, I have developed a sincere fondness for swans and especially love spotting them within the series. When it comes to these swan references, my theory is that the swans are telling us what is going on with or what is coming up with Strike and Robin’s personal relationship. If you’re interested in listening to our discussion on this theory, please check out Season 1, Episode 19 “Swans & Donkeys & Secret Tips to Lose Belly Fat, Oh My!”

There are a few swan references that I think are hinting more towards Leda/Leda and the Swan connection, but most of them I’m putting in my Strike and Robin category.

Let’s go through each one.

“A single swan bobbed along the Thames beside the far bank.” Part 2, Chapter 9

In this chapter, Strike has just visited St. Elmo’s Hostel looking for Rochelle and he stops at the Blue Anchor for a pint. We discussed in Season 2, Episode 5 “Eternal Sundays” that this reference comes right before the first time Robin ever texts Strike, but my favorite interpretation into this comes from Julia when she responded to us saying:

“You guys said the single swan appears right before Robin’s first text and that that’s symbolic. But it also appears in the moment when Strike is feeling good and happy in his single status. He’s appreciating not being expected by anyone, the bliss of being alone and unburdened. Yes, Robin is there via text, but that moment is still a before-Robin moment to me. Moment when he slowly becomes himself and fine with himself, and the beginning of a journey towards being ready for a relationship, and to welcome another swan in.” 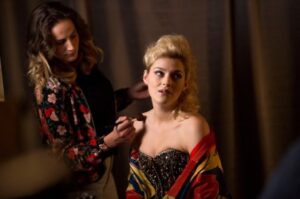 “It featured two models posing in a dirty alleyway, naked except for strategically placed handbags, scarves and jewels. Landry was perched on a dustbin, Ciara Porter sprawled on the ground. Both wore huge curving angel’s wings: Porter’s a swan-like white; Landry’s a greenish black fading to glossy bronze.” Part 2, Chapter 8

I’m going to combine my interpretation of this reference with the only one in The Silkworm.

Both the chapter eight swan reference in The Cuckoo’s Calling and this single one in The Silkworm mention two people that Strike has been romantically involved with- Charlotte and Ciara Porter. By making them both swan-like, it tells us that neither woman is his true partner, his true swan.

“‘—that turn like swans,’” interrupted Strike, who was leaning against the cooker and too far away to read the note, “‘as if inclined to gasp or pray.’” Chapter 3

This is the first reference that I don’t think fits with my theory. This is much more likely to fit with Leda and the connections to Leda and the Swan.

“If only the swans would swim side by side on the dark green lake, this picture might turn out to be the crowning achievement of the wedding photographer’s career.” Prologue

“The swans, the damned swans. If both would clear out of the background it wouldn’t matter, but one of them was repeatedly diving, its fluffy pyramid of a backside jutting out of the middle of the lake like a feathered iceberg, its contortions ruffling the surface of the water so that its digital removal would be far more complicated than young Mr. Cunliffe, who had already suggested this remedy, realized. The swan’s mate, meanwhile, continued to lurk over by the bank: graceful, serene and determinedly out of shot.” Prologue

“The moment Matthew had released Robin, the swan by the far shore had begun to paddle its way across the dark green water towards its mate.” Prologue

I know some people find this chapter hard to read but I love the prologue to Lethal White and these swan references are partially responsible for that. It has always felt like a hint of a promise of what’s to come, or a seed being planted. Swans mate for life, and it seems pretty clear to me that the swans here are representing Strike and Robin-they cannot swim side by side until Matthew is fully out of the picture.

In that second quote, I believe that Robin, in her current state of misery, is the first swan ‘ruffling the surface of the water’ while Strike is the second and currently staying out of the way. 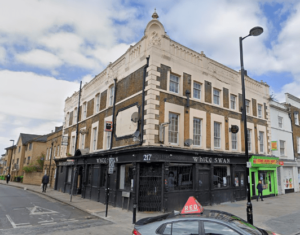 “So deeply absorbed in her thoughts was she, that for the first time all week, Robin forgot to glance up at the White Swan pub as she passed it. High above the street, on the corner of the building, was a single carved swan, which reminded Robin, every time she passed it, of her calamitous wedding day.” Chapter 3

“Her eyes flickered towards the single carved swan as she passed their local pub, but she forced her thoughts back onto the day ahead and not the man she had left behind.” Chapter 19

“Robin tried to laugh, but the noise turned into a loud wet hiccup, and as the car approached the lonely stone swanhigh on the corner pub, she began to cry in earnest.” Chapter 55

All of the swan references in the center of the book are of the same swan; a statue above the White Swan pub near Robin and Matthew’s new rented home. This single swan is high above the ground, away from everything and watching as others pass by. I think it’s a wonderful representation of how lonely and sad Robin is feeling after choosing to stay in her marriage. It’s a stark contrast to Strike’s single swan moment in The Cuckoo’s Calling where he first begins to relish in his freedom.

“Head bowed against the rain, she had no attention left to spare for the magnificent mansion past which she was walking, its rain-specked windows facing the great river, its front doors engraved with twin swans.” Epilogue 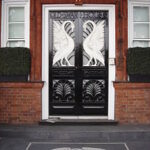 While the swans in the center of the book are all strictly for Robin, the novel bookends with swan pairs. In this final sentence of the book, we see these swans on the front door of the Old Swan House as Strike and Robin agree to meet later on at Nick and Ilsa’s. As you can see from the picture, the swans are now facing each other. I believe that this is preparing us for what is to come in Troubled Blood -that they are now facing each other equally as true business partners and best friends.

“Naked figures twisted and cavorted in scenes from Greek mythology. Persephone struggled in the arms of Hades as he carried her down into the underworld; Andromeda strained against chains binding her to rock as a dragonish creature rose from the waves to devour her; Leda lay supine in bulrushes as Zeus, in the form of a swan, impregnated her.” Chapter 46

Clear and obvious reference to Leda and the Swan. 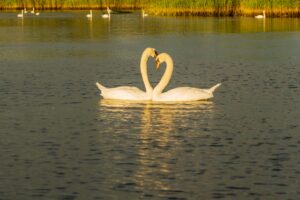 “Did the image of their own wedding flash across his mind, as it flashed across Robin’s? The church in Masham that both of them had attended since primary school, the reception in that beautiful hotel, with the swans in the lake that refused to swim together, and the disastrous reception, during which Robin had known, for a few terrifying seconds, that if Strike had asked her to leave with him, she’d have gone.” Chapter 55

An obvious call back to the swans from the Lethal White prologue as Robin says a (hopefully) final goodbye to Matthew. Go ahead and walk away now Matthew so that second swan can come find his mate! 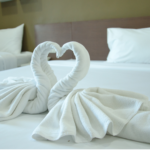 “Kirsty had arranged towels in the shape of kissing swans on the maroon bedspread, which matched the patterned wallpaper of maroon and deep purple.” Chapter 64

In this chapter, Strike and Robin are interviewing Steve Douthwaite at his B&B in Skegness. Since I already had this theory in mind when reading Troubled Blood, saying I was excited when I got to this part is a bit of an understatement.

Just like the swan doors at the end of Lethal White, I theorize (and hope) that these kissing swans are giving us a clue at what we can expect in The Ink Black Heart and that we will finally get an on-purpose kiss!

Some of my friends might give me a hard time if I didn’t mention the fact that these kissing swan towels are on a bed. I’m not ruling it out, but I’m also not going to push my luck. There’s always the chance that these kissing swan towels could be for the cheek kiss we get in chapter 73, but here is hoping for a kiss in The Ink Black Heart. The good news is that we only have to wait a little bit longer to see if I’m right!

In Part 2 of this series, we will explore the symbolism behind the swan, and what it means for Strike and Robin that Rowling chose this bird to represent their relationship. We will also dive into the connection between the myth of Leda and the Swan and all of the various representations of swans in the Strike novels. Coming soon…

If you’re reading this after reading The Ink Black Heart, you’ll know that we were very wrong about what those kissing swan towels meant! That’s ok, we’ll be patient (ish). In hindsight, we wonder if the swan towels not being real swans was a clue that the kiss we wanted wasn’t going to happen.

Aside from the mention of Leda and the Swan at the beginning of IBH, there is one mention of a single swan in chapter 34:

“Strike folded up Katya’s paper and tucked it back into his notebook, and contemplated a passing swan for a few moments before saying…”

Could this lone passing swan indicate that Strike will remain single in The Running Grave or is it implying that Robin is passing him by, as he continues to keep his eyes closed?

We can’t wait to find out.