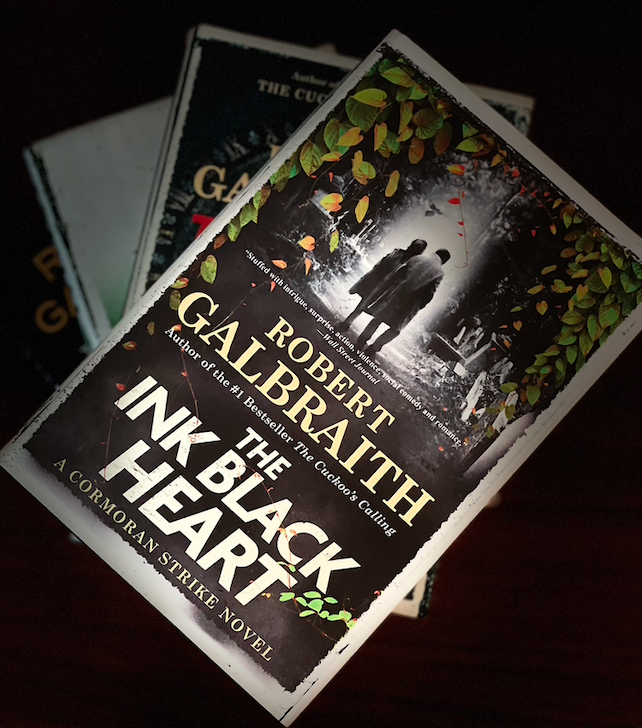 After finishing The Ink Black Heart for the first time, I was absolutely glowing. Strike’s admission to himself put me over the moon even as I was rolling my eyes that it took him so long and screaming at him to call Robin and have her come back so they could talk about their relationship right then and there. That said, even with the wonderfully heartwarming, shippy ending, I was left with a horribly ominous feeling about Robin’s future. I couldn’t shake the idea that the threat from the Halvening wasn’t over. After a few closer rereads, I have a theory and if I’m right, that feeling is because they are keeping uncomfortably close tabs on Robin through none other than Ryan Murphy – who is secretly a member of the Halvening. Hear me out…

What first got me suspicious that something wasn’t right in Robin’s world was that the Halvening found her new apartment quickly, even though it’s noted several times throughout TIBH that it’s difficult to find people if they’ve recently moved.

So, I started by looking at who, outside her immediate family, friends, and work circle knew Robin’s new address. This is a small list, not only because she’s a private person, but we’re also told that she didn’t even hire removal men (p. 572). By my count there are only two people that knew: her estate agent and Ryan Murphy. Although the estate agent sounded more than a bit off, I homed in on Murphy because the Halvening find her literally the day after he drives her home.

With my suspicions in mind, I reread the book assuming that Murphy is in the Halvening, and I was surprised at what I found. It felt a bit like the first reread of a Harry Potter book after learning about a big twist – I literally shouted out loud at a few things, and that makes me feel like I’m on to something.

Before we dive into the specifics, I want to note that on my first read I liked Murphy a lot. I thought that he would be a good companion for Robin while Strike works through all his relationship and commitment issues. But, as you’ll see, that initial impression faded quickly when I put his behavior under more scrutiny. As a side note, I also think JKR intends us to like Murphy, which might be reason enough to be suspicious of him.

Here’s a look at some of the bigger red flags I found, arranged by plot points. This isn’t an exhaustive list, but hopefully enough to make my case without coming across as too obsessed.

On my reread I kept Strike’s comment, “Don’t know if you noticed, but they never told us what that Angela Darwish does either” (p. 104) in the back of my mind. Throughout the book, I felt led to believe she is MI5 and tasked with investigating the Halvening, but I don’t want to take these types of implications at face value in a JKR novel. I’ve also noticed on rereads of other Strike books that she uses this type of language as a subtle way to break the fourth wall. It’s almost as if she’s telling us, ‘Hey look, here’s a clue’ even though we (ok, I) usually miss these moments the first time around.

So, thinking about other possibilities for Darwish’s role, I read this interview with the idea that she might be investigating an internal leak at the Met rather than (or in addition to) what we’re led to believe (more on why I chose this particular angle later). Reading from that approach, these things jump out:

As I mentioned, there are quite a few references in TIBH to the idea that it’s difficult to track people down if they’ve recently moved:

Looking at the timeline (thank you Strikefans.com), Robin moved into Blackhorse Road on May 24th, Ryan Murphy gave her a ride home on June 5th, and the Halvening member was spotted casing her new flat on June 6th. We’re not always aware of exact dates in these novels, so the fact that JKR hid just enough information within the chat logs to pinpoint these dates exactly felt important. Looking at it from the Ryan Murphy/Halvening angle provides two clues:

Leak inside the Met

We’re told that there is a suspected leak inside the Met by Ryan Murphy himself when he’s talking to Robin about the article on the Halvening (p. 242). To be honest, this made me wonder if I was on the wrong track. But because this could be an obvious conclusion to draw from the article, I thought it was possible that this was Murphy trying to build ties with the Agency for some darker reason. So, I decided to pay close attention to this behavior going forward, and I noticed a pattern:

Unrelated to the pattern of behavior, but probably the funniest “clue” I found was, “when Strike called Ryan Murphy to identify Oliver Peach as a player of Drek’s Game, and Charlie Peach as a contender for the man who’d tried to recruit Wally Cardew, he received a loud ‘fuck!’ for his trouble. ‘Friends of yours?’” asked Strike (p. 590). Strike was obviously being sarcastic, but Murphy’s reaction could have been genuine. This feels like a very JKR-esq piece of misdirection, and I can picture her giggling as she wrote it.

I also wanted to consider any clues about the Halvening as a whole rather than just Murphy as one potential bad guy and there are a few things I think are important to highlight:

Regardless of whether or not Murphy is secretly a member of the Halvening, I feel like we have ample evidence that the smarter Halvening members are still out there trying to gain a greater foothold through social media and the new web channel. That’s before getting into any HP parallels about the Death Eaters. I’d be surprised if we don’t hear from the Halvening again, which again, makes me worried about Robin’s safety.

What do you all think? Do I need to put my tin foil hat on, or does this feel like something that’s plausible? I’d love to hear everyone’s thoughts or any other evidence for or against this theory that you find. Hope you enjoy digging into this as much as I have!

16 thoughts on “The Ryan Murphy/Halvening Theory”